Overeating and being overweight: everything you need to know about this eating disorder

Compulsive overeating, also called binge eating, which is characterized by excessive consumption of food in the least amount of time possible, puts you at risk of weight gain and many other chronic diseases. Here's everything you need to know about an eating disorder. 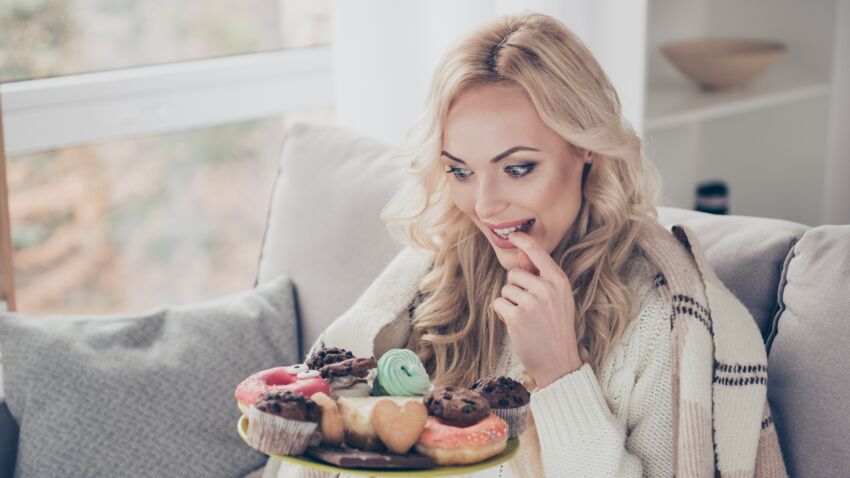 Weight gain, loss of self-confidence, low self-image, guilt ... Overeating is a common eating disorder, affecting both men and women, and can lead to many other diseases (obesity, high blood pressure, diabetes, cholesterol). , etc.). Find out the warning signs, where to turn and how to get out of them.

What is compulsive overeating?

This is the most common eating disorder, which is characterized by overeating, in a period of less than two hours.

In patients with binge eating, consumption significantly exceeds the energy requirements of the body.

This disorder results in uncontrollable seizures that are not triggered by hunger. In the case of compulsive overeating, there is no rule: attacks can occur in the morning, afternoon or evening. They can occur even after a meal, sometimes 30 minutes, or 1 hour after eating.

How do you know you binge eat?

The patient or a loved one can notice certain signs, be brought for a consultation, and then a consultation with a specialist makes it possible to diagnose this eating disorder.

The patient can recognize certain signs that can bring him to a consultation, such as:

Excessive consumption of food: he realizes that he is eating more than his nutritional needs.

Note that these compulsive food intakes are not related to hunger

In some cases, these foods can be eaten to fill a psychological or emotional deficiency.

The specialist (a psychologist, or a dietitian trained in managing this type of disorder) will base himself on five criteria for diagnosing binge eating:

The patient has frequent episodes of binge eating, with a feeling of loss of control (a kind of 'euphoria', 'patient is no longer in control', can't control his episodes, it's not a question of will).

Bulimic behavior (to be distinguished from bulimic pathology) is a source of marked suffering in the patient.

The patient would experience this insatiable behavior at least once a week over the course of 3 months.

The fact that bulimic behavior is not associated with a compensatory mechanism (taking laxatives and vomiting).

The first, and most immediate, physical consequence of overeating is excessive weight gain, which leads to weight gain, and even obesity.

In the medium or long term, other obesity-related consequences may be observed in patients with this eating disorder, such as:

The consequences of binge eating are often:

Exacerbation or emergence of depression

Why do I binge eat?

Everyone is at risk of overeating, men and women, regardless of age.

But adolescents are the people most at risk, and patient professionals often find that seizures begin in adolescence and continue into adulthood.

Fragile, emotionally dependent, and psychologically or emotionally weak people are at greater risk of developing hypereating, which is often associated with lowered self-image and/or depressive disorders.

"This eating disorder is not necessarily related to a problem with eating. Furthermore, we know the risk factors, but the cause of the overeating is currently unknown," defines Maurien Rellier.

She continues, "At a certain moment in his life, depending on his life story, a somewhat traumatic event, difficulty in managing his emotions, and mental or psychological disturbance, he will trigger this type of compulsive outburst and develop excessive swallowing behavior."

How to treat overeating?

The most effective way to treat overeating is to resort to a psychological approach.

"Managing the patient's attitude is not important in the case of overeating. The action should be global: manage emotions, find the origin of the disorder if it can be identified to act on it afterwards ...", advises the dietitian-dietitian.

For a patient suffering from overeating, the work will be psychological, and will be carried out on several levels:

Morian adds, "Managing compulsive overeating is complex, we take into account the environmental, psychological, familial, social and cultural aspects of the patient. Nutritional and nutritional aspects are little or no consideration, because that's not a problem!" Relay.

As the specialist explains, patients tend to try to control the crisis, and they will be in some kind of fight against themselves.

“However, the more a person fights a crisis, the less successful they are in controlling it, because the more they experience a deterioration in their self-image. So the goal of the therapist will be to learn to welcome these crises. Learn to welcome what hurts. With the patient, we will make sure that this crisis is gone, Because we've worked on its causes, not because we're trying to control it," the dietitian explains.

"Also, if overeating is established, it is important to realize that the person is not responsible for the disorder, that it is not their fault, and that the person experiencing it is a victim of their own journey of life," she adds, "to get out of it, you have to work on it."

This is a long job that may take a few months or even several years. Overeating is not a fatal accident, everyone can get out of it, but you need to be very patient!

Who consults in case of overeating?

If you notice many signs of binge eating, you can either refer yourself to a psychologist or a dietitian who is able to manage this type of disorder (ask the question, some are trained to manage binge eating).

In some cases (for patients with depression) they can turn to a psychiatrist for substance abuse treatment.