Frequent controversies over artificial sweeteners, such as aspartame, have made stevia, this plant from Paraguay, the new panacea for sweetening your coffee or yogurt without swallowing the slightest calorie. A godsend for slimming! But is stevia really a perfect substitute for sugar? An investigation to separate truth from falsehood. 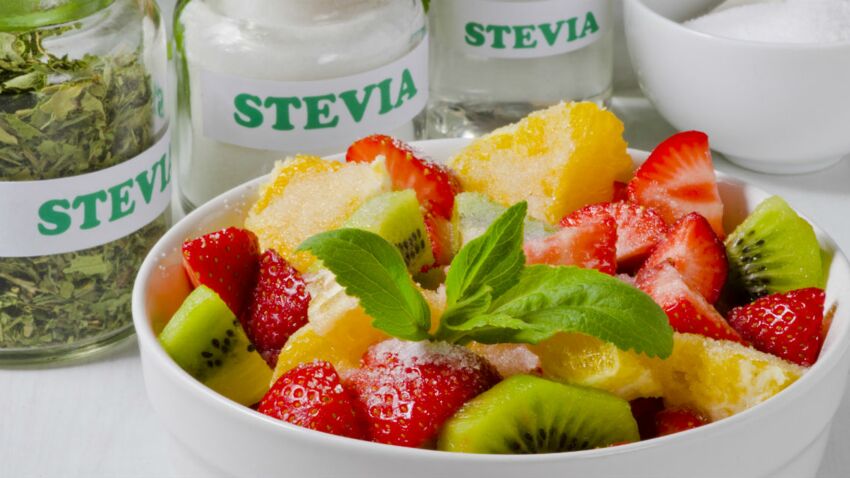 Nicknamed the "sweet grass" of Amazonia's Guaraníans, stevia has a tremendous sweetening power: 200 times more than that of sucrose (white sugar) without adding any calories. Hence the immediate craze for this more "green" alternative to aspartame or sucralose when it was licensed on the European

market in 2011. But the other side of the coin, the licorice taste of stevia was limiting its use. Not great in our morning coffee! It is also difficult for the food industry to incorporate it into products. For example, drinks that contain it also contain sugar and provide 30% fewer calories than traditional

references. While diet soda with aspartame is calorie-free. Expanding its goal, the brand Pure Via has just launched a new formula for Stevia's Unpleasant Taste. And it's true, after testing it, that the little licorice taste was gone. The texture of the product is also quite amazing: tiny crystallized granules like real sugar. Two good points then... The fact remains that praising stevia as a 'natural' sweetener is on point.

Have you ever heard of sucralose, the slimming sweetener?

Stevia is not always natural...

Of course stevia is a plant. But in France, not dried leaves are used, but extracts called steviol glycosides (including rebaudioside A). These extracts are purified by industrial techniques. DGCCRF* also notes that "Stevia rebaudiana's stimulants confuse the plant with the molecules from which it is extracted. These two products are very different. The plant origin of the purified molecule is presented as 'natural' over artificial sweeteners. However, steviol glycosides are purified by more than 95%, which makes it a product as far from the original plant as the sucrose found in beets!”

Only 1% Stevia in sticks or pieces!

For example, in stevia sticks, there is 1% stevia extract and 99% erythritol (polyol, from the same family of sweeteners found in sweets or sugarless gum) or maltodextrin (a sugar found in some energy drinks). These additives act as agglomerating agents (also known as fillers or blowing agents), that is, they increase the volume of the product. Sticks can also contain flavors (vanilla or red fruits for

example). There are also stevia extracts on the market. Blended with inulin, a neutral-tasting dietary fiber with zero glycemic index. 100% stevia powder is present (sold in certain locations) but it is not easy to dose: 200 times less sugar is necessary. Not very practical when you're in your kitchen! This explains why brands sold in supermarkets include in their products the famous agglomerating agents: the stick is, therefore, the equivalent of sugar. To sweeten your espresso, it's still easier.

There are almost no studies on stevia

Is stevia safe? Yes, answers the Pure Via brand, which states that "Erythritol has long been licensed by many countries (...) and its use is permitted without specifying dosages as a bulking agent in solid foods." However, ANSES**, in its 2015 report on sweeteners, regrets the lack of studies on stevia. Because even if the plant has been used for a long time in South America, there is little experience with its extracts as a sweetener. That is why the ADI (Acceptable Daily Intake) is set at 4 mg per kilogram of weight per day: this is ten times lower compared to aspartame.

So everyone is free to use or not use sweeteners because they are on the counter, and what is important is that you do so with full knowledge of the facts and knowledge of the exact nature of the product you put in your coffee or yoghurt...