Konjac: 7 good reasons to eat it to lose weight

Konjac: 7 good reasons to eat it to lose weight

This is the Japanese secret of slimming! Less calories than lettuce, it contains "magic" fiber that suppresses appetite and is very useful when you have a good fork and want to lose weight. 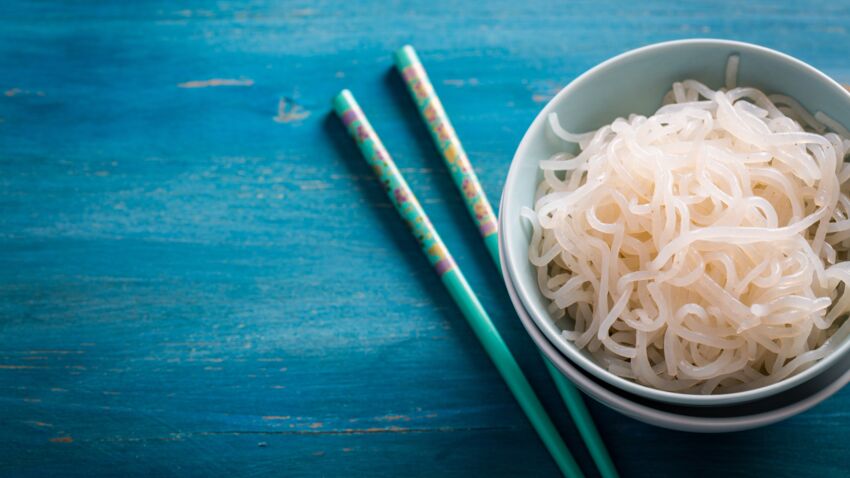 Konjac, this Asian tuber, is the star food for slimming. In France, it was the famous nutritionist Pierre Dukan who popularized it here in the 2000s, by incorporating it into the famous diet that bears his name. Now it can be easily found in supermarkets, exotic grocery stores and organic stores. Practical, konjac can replace pasta or rice and can be cooked in a thousand ways in very light dishes!

Konjac: Lighter than a salad!

Konjac is 70% fiber, the rest is water! No wonder his calories are ridiculous. Only 10 calories per 100 grams while the salad, the slimming food par excellence, contains more. It is one of the few foods that you can eat in large quantities without paying for it on the scale. A godsend for those who keep track of the calories on their plates. It's too bad that it doesn't prevent cravings for fat or sugar, or food compulsions due to stress!

It is rich in appetite-killing fibres

Konjac contains a magic fiber: glucomannan. In the presence of a liquid (water, milk, etc.), this soluble fiber forms a viscous, compact gel that absorbs up to one hundred times its weight in water. Result: in the stomach, the effect of the mass fills the stomach. It turns out that the icing on the cake, this very viscous gel is a real trap for fats and sugars, slowing down their digestion and absorption.

It is an appetite suppressant

Thanks to this super fiber in particular! Konjac calms a large appetite, which is a very useful boost when extra weight is associated with a good fork. Since it quickly swells in the stomach, we get full quickly, and for a long time. The results: We eat less at the table and don't snack between meals...so, in the end, we ingest fewer calories during the day.

Asian tubers reduce and slow the passage of sugar into the blood. As Anne Dufour, a nutritionist, states in her book "My Magical Recipes with Konjac" (Leduc.S Edition): "Researchers have shown that if you mix 4g of glucomannan in food, you halve your peak blood sugar, meaning that a higher Blood sugar, however, all nutritionists strive to control this parameter because the higher the level of sugar in the blood, the greater the body's reserve and the greater its growth.

It's also proven. Konjac not only lowers total cholesterol levels, but also improves the good/bad ratio. According to studies, by consuming 10 grams of glucomannan per day, there is an average reduction in cholesterol levels of about 11% in three weeks.

It has an anti-diabetic effect

Other studies cited by Anne Dufour have shown that "it improves insulin sensitivity, that is, thanks to it, cells use sugar better, without the pancreas needing to manufacture large amounts of insulin, which is one of the main points in the onset of diabetes." But don't misunderstand: Konjac does not prevent or treat type 2 diabetes.

In pasta, rice and pearls...it's the king of slimming kitchen

It comes in shiratakis (a type of spaghetti) and chichimines (near tagliatelle), in lumps (like tofu) and in gohan (rice-like pearls). They are available ready to use or precooked. It remains to heat it for 2 to 3 minutes in boiling water or directly in the pan. Its transparent, slightly gelatinous appearance and

tasteless flavor are not attractive. The neutrality of taste is indeed an asset. Because konjac takes on the taste of all the foods it associates with: light cream, coriander, curry ... to be tested with ratatouille or fried mushrooms, zucchini or peppers, bolognese-style, with pesto, with seafood, with salmon or diced pork.. What matters for flavor is the seasoning...as long as it's light!