Carbonara Sauce or Bolognese Sauce: Which Has More Calories?

Carbonara Sauce or Bolognese Sauce: Which Has More Calories?

To enhance a pasta dish, there is no such thing as a bolognese sauce or carbonara! Two options do not have the same effect on the line! Which of these sauces has the most calories? Nutritionist's response. 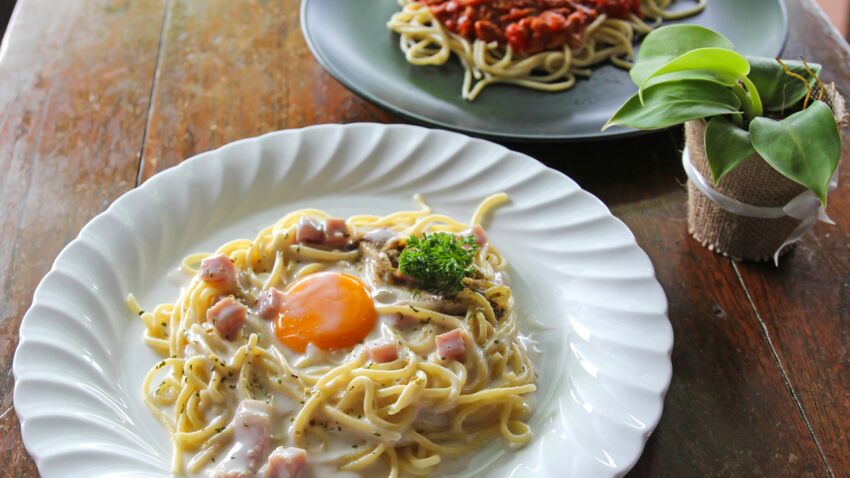 Convenient, satisfying, easy to cook... It's not for nothing that pasta is one of the French's favorite foods! With butter, sauce, or in a salad, there are many ways to taste this basic dish: so there's something for everyone! Among the main pasta recipes are those with bolognese and carbonara. Delicious and gourmet sauces, which do not have the same effect on the line. Which one has more calories?

Carbonara sauce is a calorie bomb

This tomato and meat sauce does not contain harmful foods except fat if too much oil is used and too much portion is used. The situation is different for the French carbonara sauce: the fresh cream, bacon bits and egg yolks it contains are very rich in fats, especially saturated fatty acids, trans fatty acids and cholesterol. It's a low-calorie nutritional bomb.

So Bolognese sauce is much lower in calories than carbonara but above all more interesting from a nutritional point of view, because it contains meat, and therefore proteins, olive oil, and therefore unsaturated fatty acids, as well as tomatoes and therefore lycopene, which is an antioxidant.

Are you a fan of pasta carbonara but care about your line? Don't panic: There are tips to limit your calorie intake for this gourmet sauce. you can:

Replace the whole cream with light cream of 15 or 5% fat, cottage cheese, yogurt, or soy cream.

Choose a real, Italian-style carbonara recipe, which contains no cream but Pecorino cheese, not necessarily the lowest in calories, but rich in protein and calcium.

If the bolognese sauce is not particularly caloric, it is possible to reduce the fat intake without limiting the amount of protein. you can:

Use minced meat with 5% fat;

Limit the amount of oil used.