What you do not know yet about creatine

Most of us would agree that there is no better product for increasing muscle mass and building muscle. Creatine has a very good reputation: it is the most common and recognized substance used in training. 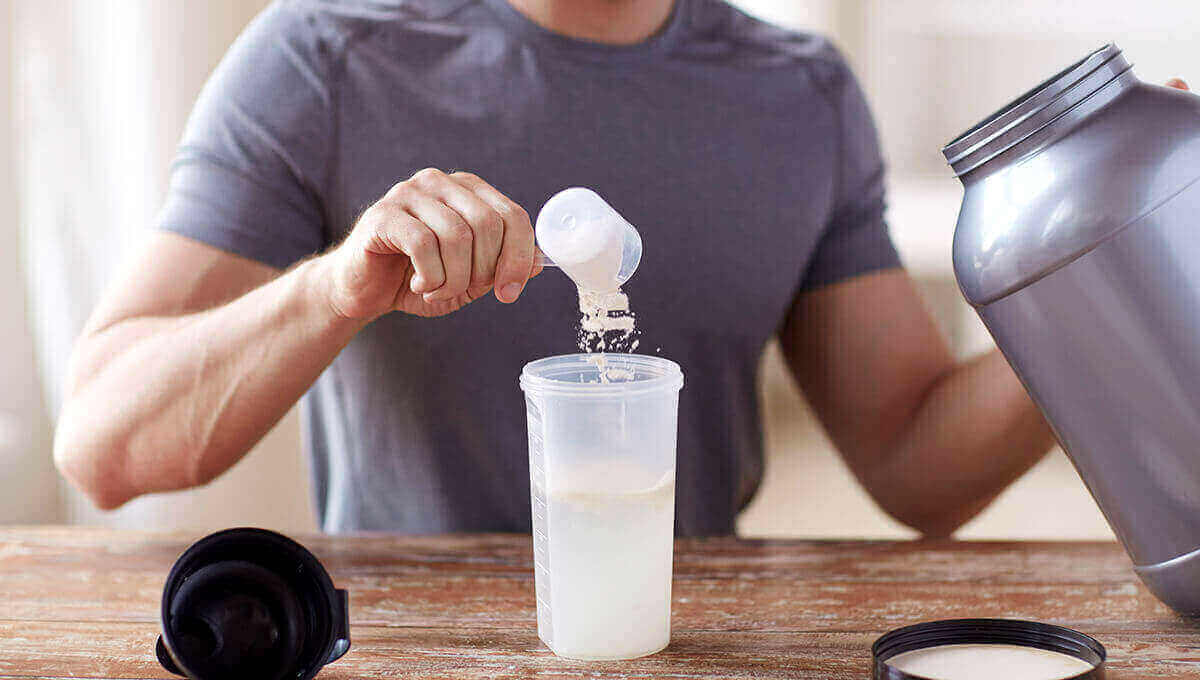 Creatine is an organic compound found naturally in the body and stores energy in the muscles. It consists of 3 amino acids:

The body contains approximately 120g of creatine in the form of creatine phosphate. We get it from food, but even with a healthy and balanced diet, we are not able to provide the body in the right amount. The highest amount of creatine is found in herring (6.5-10 g/kg), pork (5 g/kg) and beef (4.5 g/kg). However, we cannot absorb it exclusively from food, so it is necessary to take it in supplement form.

What is the dose of creatine?

Creatine dosage is a controversial issue, around which many disputed theories. The optimal dose is considered to be 5-10 g per day, but the saturation phase is most often applied (initially a larger dose of the preparation is taken at once) or on an empty stomach. However, no study confirms these hypotheses with certainty. The best thing is to adjust the creatine dose in relation to your weight, in a ratio of 1g of

creatine to 10kg of weight. The preparation should be taken twice a day, the first dose in the morning before exercise and in the evening immediately after exercise. It is best to take creatine in combination with other supplements such as nutrients high in protein, carbohydrates and taurine. This promotes better absorption. Creatine can be taken all year round, without the saturation phase.

What are the effects of using creatine?

The role of creatine is to store energy in the muscles, and the higher its level, the more energy is used. We derive energy from ATP, adenosine triphosphate, which activates muscle contraction. ATP is made of phosphate bonds called high energy bonds. When bonds break, they release:

ATP is considered a source of energy, although it has a low energy storage capacity, and is only required for a small number of contractions. ATP replenishes by recombination, but this only happens in the first milliseconds. Anaerobic recombination is activated by phosphocreatine, then by blood glucose or muscle glycogen. It is important to maintain contractility and prevent large conversions of ATP to ADP and Pi. However, if we need a lot of energy because we plan to work harder, we must derive energy from oxygen metabolism. So we need more carbohydrates,

As for ATP, the energy "source" is phosphocreatine, its content is 5 times that of ATP and has a storage capacity. Energy is released in the following way, phosphocreatine breaks down into:

To replenish creatine, free creatine is needed. When you run out of strength, it means it's not too much ATP to add, but phosphocreatine. However, taking up phosphocreatine is difficult because it is broken down during digestion. It is therefore necessary to provide nutritional supplements containing creatine that:

What are the opinions about creatine?

Creatine is an essential ingredient for athletes and one of the most effective nutritional supplements on the market. It is often used in the water-soluble monohydrate form. The monohydrate rapidly binds water to the muscles, promoting a rapid increase in muscle circumference. Creatine has an excellent effect, among other things, in increasing body strength and endurance, muscle mass growth and water storage in muscles.

For those who exercise very intensely, a drop in creatine sometimes occurs. Strength athletes have more creatine reserves in their muscles, but that doesn't excuse them from taking the supplement regularly. Creatine is also ideal for endurance sports, especially when the need for strength and speed, not endurance, is important in the final stages of competition.

What is Creatine Malate (MCT or TCM)?

The preparation is an intermediate product in the Krebs cycle, that is, the cycle of combustion of bicarbonate fragments, in which the equivalents of hydrogen and carbon dioxide are released. Creatine malate stimulates ATP synthesis, which also releases energy and helps athletes increase their endurance.

Creatine Malate is the only amino acid that leaves the mitochondrial membrane and does not convert to another amino acid, so it enters the Krebs cycle and releases energy into the muscles.

Creatine malate has a catabolic effect. After leaving the mitochondria, it turns into PEP (phosphoenolpyruvate) which transports a phosphate greater than ATP, thanks to which it can be used to activate ADP and create ATP. This is how energy is generated in the muscles.

Another advantage of creatine malate is that it dissolves better in water than creatine monohydrate, so it can be better absorbed. Creatine malate consists, among other things, of citrates and pyrogronate, which are taken up in large quantities from the digestive system and increase muscle mass more effectively. However, you should be aware that muscle growth may be less satisfying than monohydrate.

What is the relationship between MCT and Vitamin D?

Creatine is very safe for health. Currently found with insulating materials such as sodium bicarbonate or sodium citrate. Thus, the correct balance is maintained in the muscle cells.

Add vitamin D to fresh creatine. Vitamin D has a very wide range of applications and can act on many properties, tissues and organs:

Vitamin D is especially important for people with insulin resistance, as patients usually have a significant vitamin D deficiency, and insulin transports nutrients into muscle tissue only if there is adequate sensitivity to insulin. Vitamin D helps in this process. Insulin is a very important anabolic hormone in the metabolism of carbohydrates, fats and proteins. MCT and vitamins interact.

What is the additional use of creatine?

We are just beginning to discuss the effects of creatine on areas other than energy storage in muscles. Creatine is successfully used in the elderly to support: