The Bungee Pump: An Alternative to Nordic Walking

The bungee pump is a variant of the classic Nordic walking, a more dynamic and playful version thanks to its springy poles. It improves walker's posture, burns more calories and engages almost every muscle in the body! It's still a pretty affordable exercise regimen, and has already conquered many of the French. Discover the principles of this exercise walking and its benefits on the body. 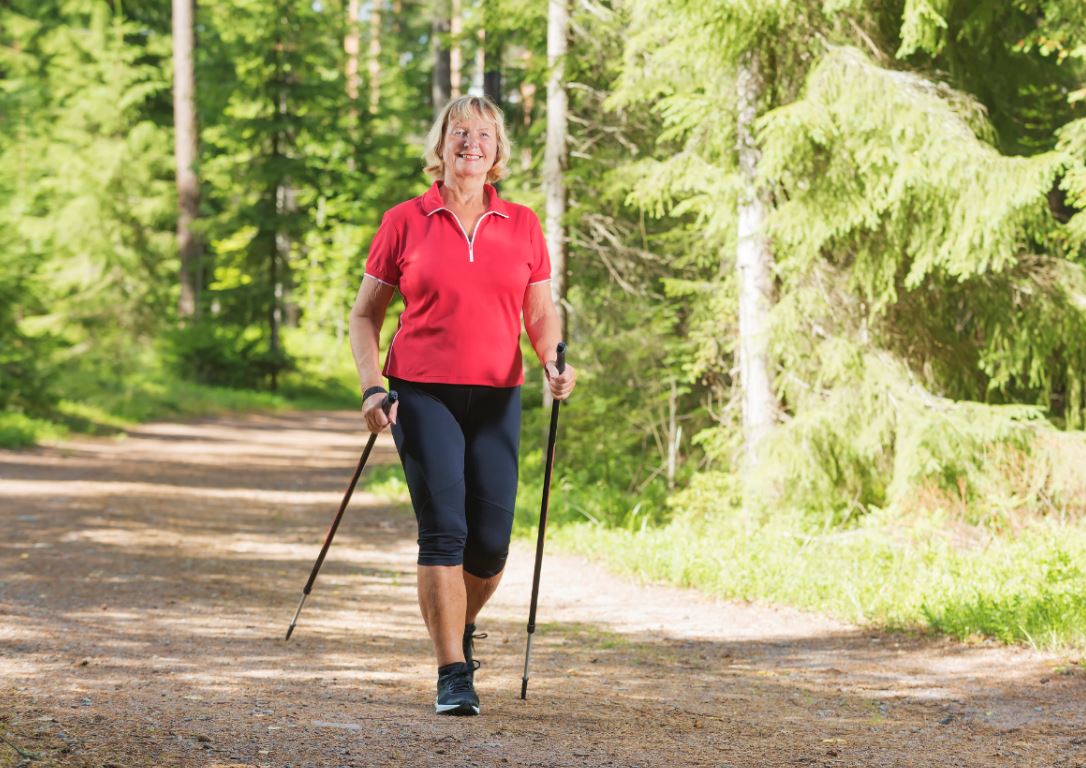 The Bungee Pump, the most energizing alternative to Nordic Walking

For training, skiers walk across the country or run poles to mimic the movements they perform on the ice during ski season. This training then became a sport in its own right in 1997 when it was launched in Helsinki. Scandinavian walking was baptized or "Sauvakävely" in Finnish. This technique consists of walking with sticks that accentuate the swing of the arms and generate a greater range of motion. It

was refined by the Swedes who had the idea of ​​adding resistance at the end of the sticks, between 4kg and 10kg, allowing you to push yourself further and working the muscles of the body deeply. You don't have to be a great athlete to get started, nor do you have to have expensive equipment. A pair of sneakers and poles,

The bungy pump gesture remains the same as with Nordic walking, i.e. a refreshing walk with a long stride, but with better propulsion and coordination of movements. When the left foot is in front, the right arm is in front, the left arm is behind you and the limb is planted in the ground. And vice versa when starting with the right foot.

A little more intense than the classic Nordic walking, the bungee pump is still a gentle sport that can be practiced by people of any age and any physical condition. While using a bungee pump, you are using 90% of the muscles in your body. Column springs help absorb shock. So it is a nice sport for the joints. In addition, this pump system facilitates the release process and allows you to connect movements without difficulty and in a natural way without putting in effort. The back muscles and the abdominal

girdle work at the same time. The practitioner naturally puts themselves in a better position because they straighten their back. This opens up his rib cage and allows him to enjoy better oxygenation during exercise. On the other hand, the club's bungee pump sessions are accompanied by wrapping exercises, but also Pilates to work out the deep muscles. So it is a very good muscle building sport.

The Bungee Pump helps naturally straighten the practitioner's back. While walking, they should look straight ahead which keeps the bust straight. Straightening the back opens the chest and increases the ability to breathe during exercise. Thus, the muscles, heart and brain are better oxygenated.

Burn calories without realizing it!

The Bungee Pump is recommended for people looking to lose weight, more specifically fat, without losing muscle mass. Based on cardio and respiratory training, the bungee pump allows you to burn calories, but without feeling tired after running or hiking. A study showed that this sport will burn approximately the same number of calories as running. Calorie expenditure would be 28% higher than classic Nordic walking, and 77% higher than walking without a stick. comparison:

Bungee pump shafts are suitable for all types of terrain

The poles used in the bungee pump can be used in all types of terrain, whether you are walking on small country roads, in the woods or in the mountains. In addition, the tips can be replaced to adapt to other situations, walking on sand, dirt or snow, to prevent the columns from sinking. Very practical to adapt to every season change. This also allows you to take them everywhere whether you are going on a ski vacation or going to the sea.

Health benefits of a bungee pump

As you understand, by working all the muscles of the body and improving the capacity of the heart and respiratory system, the bungee pump improves the health of its practitioners. It can cause weight loss by melting excess fat. This exercise promotes better use of blood glucose which leads to lower insulin. So it is a recommended activity for diabetics.

Oxygenation of organs, such as the heart and brain, keeps their shape better and for a longer time.

A bungee pump can also have a lot of benefits for people with osteoporosis or osteoporosis, which affects the bones and joints. The shafts absorb shock. In addition, it preserves bone capital, prevents the risks of lower back pain, and regenerates bone density.

As you understand, the bungee pump has advantages only for your health. By being less stressful, and even fun and enjoyable, this sport allows people who lack physical activity to find fun and improve their physical condition.