The shoulders are among the most visible muscles. Its shape and size are a sign of masculinity, health and strength. This is why it is so interesting to learn more about the work of the shoulder muscles. 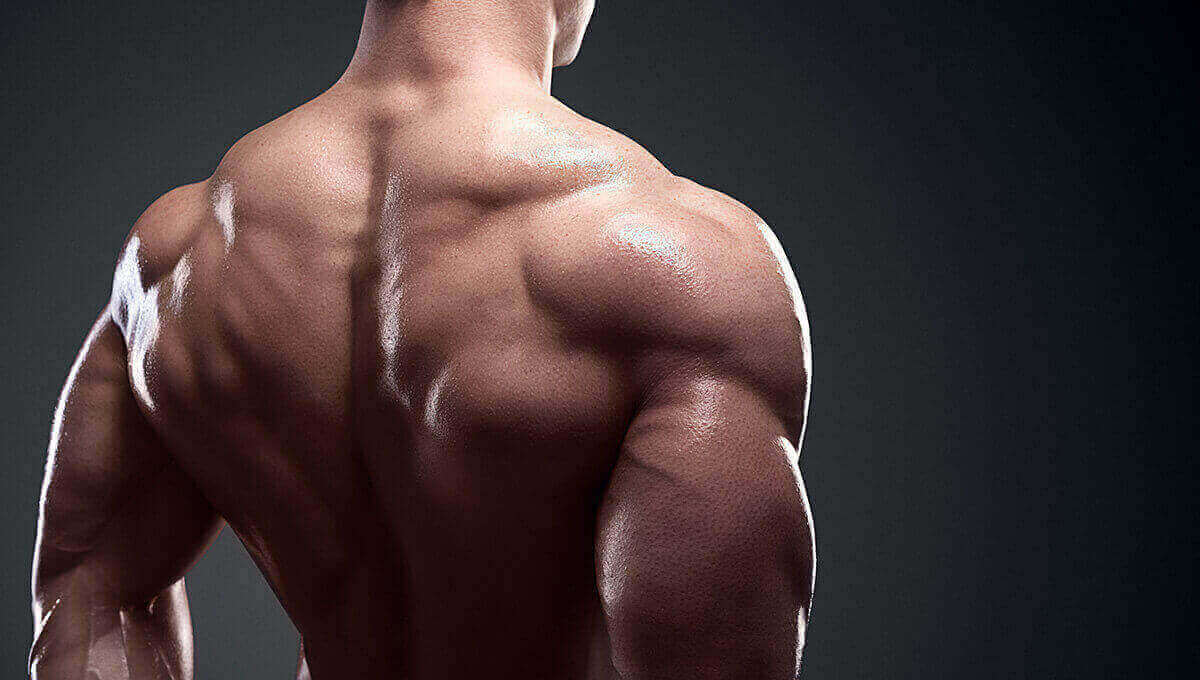 The shoulder muscles consist of three parts (anterior, lateral, posterior). Each part is responsible for a different type of movement and each part needs at least one separate exercise. Remember to always adjust the number of sets and reps according to your current weight training program.

Shoulder work is associated with intense work of the triceps, which is why shoulder exercises are often combined with biceps exercises. Similarly, arm exercises will be effectively combined with back exercises. Thanks to this, the muscles of the shoulders

receive a boost that allows for a versatile development. When choosing exercises for your shoulders, you should also consider regeneration. This will prevent a situation in which one part of the shoulder muscles will be overtrained and the other will be under training.

We are sitting on a bench with a back. The backrest is positioned slightly back so that the bar can be pushed up vertically. Holding the bar in front of you, lower the bar as low as possible and extend it as high as possible to use the widest possible range of motion. The hands are not blocked when the elbows are bent. All elbow movements in front of the body.

This allows you to benefit from the greater work of the shoulder muscles (the front part) and less work for the triceps. Adjust the grip spacing to the width so that the wrists are always straight in line with the extension of the forearms. In this exercise, it is recommended to use a belt to strengthen the lumbar part and thus reduce the risk of injury.

The exercise is done with dumbbells. We sit on a bench prepared in the same way as in the previous exercise. We pick up the dumbbells and start the movement in the position as if we finished bending the forearm with dumbbells on the biceps. Elbows in front of the body and slightly raised (dumbbells at chin height). From this position, we develop the dumbbells

upward and towards the self, so that the dumbbells are close together. However, we avoid hitting the dumbbells. During the entire movement, we turn the wrists so that they turn outward by 180 degrees. The most common mistake is moving the elbows out too quickly. We focus on twisting the wrists and the force directed vertically upward on the bars. This exercise uses the front of the shoulder muscles.

3. Press the neck with a seat belt

The exercise is performed in the same way as the first exercise, but with the difference that the elbows are now directed outward, and the backrest can be positioned vertically. Let's try to lower the bar at least to ear height and preferably touching the shoulders. This exercise develops the front and side parts of the shoulders. It should be performed very carefully, with complete weight control at all times.

4. Alternate arms forward with dumbbells and push-ups (while standing)

We stand with our legs together, hips slightly turned back and head slightly in front of the body. Thanks to this, we have better isolation of the shoulder muscles, since the possibilities of tilting the torso are reduced. In this position we raise the dumbbells in front of us, turning

the wrists at the final stage so that the backs of the hands are facing up. This allows for greater involvement of the lateral and posterior portions of the shoulder muscles. As you move the hand, it should be slightly bent toward the elbow. The movement ends when the elbow slightly crosses the shoulder line.

5. Both hands lift the upper side while pulling the cables

We stand between the two lower, gantry-like tow cables, slightly backward, so that the paws are in front of the tow cables, not the body. In this position, we take the opposite handles of the pull-up cables in our hands and raise them sideways as if we were lifting the dumbbells sideways up.

Let's put the seat back at a 30-degree angle and stand on it sideways. Hold the arm so that the angle between the shoulder and the line of the ribs is about 90 degrees. From this

Shoulder shrug with a barbell is an exercise for the quadriceps and upper body (caps). We stand close to the axis of the crossbar, grab the axis in the cup (we can use different tools to strengthen the grip). We move the head a little forward from the body and in this position

we raise the shoulders with a dynamic movement as high as possible and lower them as low as possible with a movement that controls the contraction of the quadrangular muscles. The most common mistake is tilting the head back which shortens movements and thus reduces muscle work.