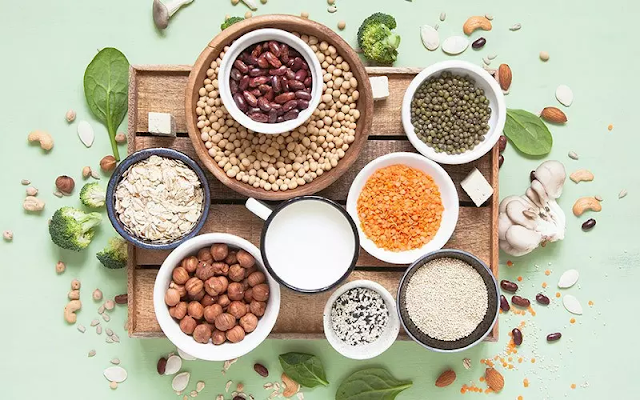 What does the name "Lewis Hamilton" mean to you? Maybe you're thinking about the fact that this Formula 1 driver is a seven-time world champion with Mercedes-Benz... and also the fact that his

team has won the constructors' championship 8 times, that Lewis is a knight and is a strong supporter of the Black Lives Matter movement? You're right, of course, but Lewis Hamilton is also a vegetarian.

He is part of a growing group of professional athletes who have banned animal products from their diets. The group also includes

These athletes are living proof that you don't have to eat meat to get all the protein you need to build muscle, build endurance, and perform at your best. In the past, vegetarians had to be creative with

their menus, because the choices available to them were rather limited. Today, there are more vegan options than ever, like our vegan protein for an easy breakfast, snack, or post-workout drink.

What's wrong with protein for vegetarians?

Before answering this question, let's go back to how proteins work. As you know, proteins are what most of our cells are made of. Proteins are made up of a mixture of 20 amino acids. The body

makes 11 of them, which means that the other nine, which are considered "essential", must be present in the diet in order to ensure the proper construction of muscles and other tissues.

However, not all proteins are created equal. What determines the quality of a protein is above all its amino acid composition and digestibility. This is called the biological value, which indicates how many grams of protein the body can use per 100 grams of food eaten.

Proteins that come from animal products are readily used by the body, which are also complete proteins. On the other hand, plant proteins do not contain all nine essential amino acids, and the amino acids they contain are not always present in sufficient quantities. That's why plant proteins aren't always a consensus.

However, research indicates that it is not really vegetarians who are lacking in protein, but carnivores who consume a very large amount of it. Over the past century, protein consumption has increased with

rising incomes, which has coincided with the increased availability of affordable meat. This was discovered by researchers from Paris-Saclay University in France and Stanford University School of

Medicine in the US. They looked at studies looking at how much protein vegetarians eat, with some interesting results. "A small number of vegetarians may be deficient in protein, but this

observation may be skewed by the higher and very adequate intake received by the general public," they say. In terms of amino acids, there also seems to be no question of deficiencies. Even people who

do not eat a lot of plant-protein foods will not usually suffer from a deficiency, provided that they eat fruits, vegetables, and grains. In

addition, previous research conducted in Australia proved that the body is able to "store" amino acids, so it is not necessary to take all the essential amino acids at every meal.

You are not convinced yet? Know that there are also plant sources of complete protein, including soybeans, legumes, quinoa and hemp. Easier than that: our vegan protein balls, which will give you a good

portion of plant-based protein. They combine the best quality protein sources with peas, hemp, rice and sunflower seeds, without containing soy. What a great way to strengthen your muscles!

Do you want to feel fit and in the best shape? So you have to change your eating habits in the long run. All you have to do is make sure you eat a variety of fresh foods carefully. This way, you will absorb

all the amino acids you need in a complete, natural and convenient way. To help you know where to start, we've put together a list of plant foods that have the most protein per 100 grams.

What plant foods have the most protein?

Here are some safe bets that are widely available at an affordable price:

In a frying pan, grill the tofu pieces. Add grilled broccoli and Indian sauce over low heat. Served with rice.

Cook buckwheat noodles (soba) and mix them with edamame in a spicy peanut sauce. Finish by decorating with crushed peanuts.

Make pesto with pine nuts and pumpkin seeds, and spread it on a slice of whole wheat bread. On top, add avocado.

Prepare a portion of the coral lentils and use the cooking water to make a vegetable soup.

Mix flaxseeds, almonds, and red fruits with oat flakes and vegetable yogurt. Put everything in the fridge and enjoy the next morning.

Toast some tempeh with ras el hanout and roll it up to form a toasted pita bread. Add raw onions, tomatoes and natural vegetable yogurt mixed with chopped dill for a new Greek sandwich!